Say Hello To Our Advisory Board

Shoptalk Europe’s agenda calls out the most important trends and technologies across retail and grocery, delivered by the industry’s boldest leaders pioneering and innovating to build the future.

But to craft such an agenda, we know the industry needs to work together.

And that’s why we’re introducing our Shoptalk Europe Advisory Board ensuring every minute across our stages will fuel powerful conversations on only the biggest topics impacting retail and grocery today and tomorrow.

Mustafa Murat Bartın, born in 1974, graduated from Middle East Technical University, department of Industrial Engineering. He started his professional career at Mİgros as an Industrial Engineer at R&D in 1995, and worked as Business Development Expert, R&D and Planning Project Leader, Marketing Manager of Migros Online. Between 2000 and 2009 he worked for Hewlett-Packard Turkey and held positions as E-Business Sales Manager, Pre-Sales Service Manager, Business Development Manager, Sales Manager, Consultant and Integration Country Manager respectively. He joined Migros as Information Technology and Business Development Director in 2009, and he was appointed as Chief Alternative Sales Channels Officer responsible from International operations, Wholesales and Online Retail Operations between 2015-2018; Chief Large Format&Online Retail Officer between 2018-2020. Bartın has been Chief Operations Officer since July 2020. He is married and has two children.

Cassandra joined John Lewis as the Director of Omnichannel in 2020. She is a passionate customer experience and ecommerce leader, spending her career in digital retail starting on the inaugural team that launched Barneys.com and then MrPorter.com. She then moved to Net-a-Porter.com to run website trading. In 2017, Cassandra joined Charlotte Tilbury as Director of Ecommerce. Cassandra is a Pilates enthusiast, loves to cook and read thriller novels.

Chopra joined e.l.f in January 2016 and brings over 20+ years of Technology experience from private equity and retail companies. She is the Chief Digital Officer for e.l.f. Beauty and is responsible for digital transformation in her current role, including eCommerce, engineering, data ecosystem, enterprise applications, security, metaverse, AI/AR and consumer technologies. She is actively involved with leading e.l.f. Beauty's digital efforts to grow our digital footprint across the globe. She joined e.l.f from the James Irvine Foundation, where she defined and led a highly successful technology strategy for an investment portfolio. There she focused on the technology roadmap for enterprise applications, cloud transformation, and building relationships with top silicon valley brands to start new partnerships. Before that, she served as VP of Technology for Charming Charlie, a specialty retailer that grew from 17 to 120 stores nationally. She holds a B.A. in technology & operations management and a minor in finance from California Polytechnic State University. She enjoys volunteering at non-profits by building their technical capacity and is a member of Silicon Valley CIO/CTO groups as a thought leader.

Carole Diarra is the Global Vice President of Marketing/CMO for UGG. She leads creative, brand, collaborations, social and product marketing experiences. Her vision is to accelerate growth and cultural relevance through purpose, community, and immersive experiences as the iconic footwear brand transforms into a fashion-driven, global lifestyle brand. Carole was most recently the Chief Marketing Officer of Arbonne International, a vegan, luxury skincare and nutrition brand, where she helped drive over 30% revenue growth while spearheading a major rebrand and securing the B Corporation Certification.  Prior to Arbonne, she lived in New York and spent 15 years honing at L’Oreal SA, a leader in the beauty industry, where she held various positions in brand management, P&L, and innovation across multiple brands, including Vichy and Garnier . She started her career at Accenture in strategy consulting and worked across government, retail, and technology businesses.  She received her MBA from Harvard Business School and her bachelor's degree from Duke University in Economics.  Carole currently lives in Paris and is married with two children.  She is passionate about inspiring and uplifting young girls, women and underrepresented communities to be resilient and courageous in achieving their dreams. She recently learned to play tennis during the pandemic and loves to run along the Seine,  take long baths, and practice visualizations to restore mental wellbeing.

Daniel Gebler is CTO of Picnic, the world's fastest growing online supermarket that makes grocery shopping simple, fun, and affordable for everyone. Previously, he was Director R&D of Fredhopper, responsible for the product and technology roadmap, and led engineering teams located in Amsterdam and Sofia.

Roger Graell is Global Ecommerce Director at Mango, Mango sells online in more than 90 countries across the globe.

Previously Roger served as Southern Europe marketing director at Lastminute.com from 2007-2010, European subsidiary of Travelocity.com, a worldwide leader in the online travel industry. Prior to joining Travelocity, Roger worked for 6 years at Redcats (ex-home shopping division of Kering Group) in different senior positions in marketing and operations, developing the business for brands like La Redoute, Vertbaudet and EmpireStores, across various European countries.

Roger Graell holds a diploma from the Polytechnic University of Catalonia on Mathematics and Statistics and a Management Development Program (PDD) at IESE Business school. As well, works as associate professor of e-commerce and Digital Marketing in ESIC Business School.

Bruno Mourão, Head of IT Transformation & IT Strategy & Experimentation

Bruno Mourão
Head of IT Transformation & IT Strategy & Experimentation, Sonae

Bruno Mourão is the Head of IT Transformation and IT Strategy and Experimentation at Sonae MC. Sonae is a Portuguese conglomerate group with operations in different sectors as retail, financial services, telco, shopping centres and investment management and presence in more than 70 countries. Bruno joined Sonae in 2012 and is focused on Sonae MC, the core business of the group and market leader of the Portuguese grocery retail landscape.

Head of IT Transformation & IT Strategy & Experimentation

Parag Parekh is acting co-Chief Digital Officer at Ingka Group, the largest IKEA Franchisee. He has the responsibility for developing digital capabilities and accelerating the digital transformation of the business. Parag joined Ingka Group in 2021 with more than 20 years of experience in digital and technology functions for global companies.

Prior to IKEA, he held senior roles at adidas with responsibilities for omnichannel transformation, ecommerce and product engineering. Parag also spent several years as a Senior Program Manager and part of the Leadership program at General Electric.

Born in India, Parag has worked in the US, Asia, UK, Spain and Germany. He now lives in Sweden with wife and 2 daughters. He enjoys running, listening to podcasts and taking every possible opportunity to enjoy the outdoors with his family.

Lesley joined Kellogg in 2014 and served as the European CIO, with geographic coverage of all European countries, plus Russia, Egypt, and UAE. She had regional accountability for Information Technology, Global Business Services and the European Enterprise PMO. She played a key role in operational, tactical and strategic execution across all areas of the business, driving growth initiatives and delivering multi-million-dollar savings.

Prior to Kellogg, Lesley had more than two decades of experience in the Consumer-Packaged Goods industry.

She began her career with United Biscuits, spending 13 years working on major IT strategy and change initiatives, moving through the ranks from Junior Business Analyst to IT Controller. Following that, she moved to Premier Foods where she led the end-to-end SAP program and supported the integration of a major acquisition.

Lesley then moved across industries for five years, leading a major transformation of the IT function within Galaxy Optical, the largest Optical Manufacturer in the U.K.

Throughout her career, she has been a passionate leader and ally in Equity, Diversity, and Inclusion (ED&I). She believes in creating a culture and teams where everyone feels they belong; amplifying her voice to support the advancement of women in technology. This year, Lesley also proudly takes on the role of Executive Sponsor of the K Pride and Allies Business Employee Resource Group (BERG) which advocates for equality for LGBTQ+ communities around the world.

Lesley resides in Wigan, a small town in the North West of England.

Passionate E2E Retail Activation expert with 24 years’ experience within local & global functions. With an unrivalled knowledge on toy shoppers & insights, the ability to produce impactful omnichannel activations & frameworks that deliver to  the commercial ambitions.  An experienced leader with diverse cultural understanding, the core ability to influence & lead multiple stakeholders through networking & teamwork, coupled with a strong personal focus on continued development for both self and team. Energized through continuous learning & capability building.  Working for a brand that allows open space for creativity & fuels peoples passion to develop retail experiences, communication and activations that are unique, fun, memorable, impactful & enhance the LEGO System of Play for Shoppers and Consumers around the world.

Before jumping into the world of well-being and beauty-tech at the end of 2020, Boris  Trupčević was a media expert with over 25 years of experience, a long-time CEO, former  General Manager of Styria Group Croatia, Board member at International News Media  Association, and president of Croatian Publishers Association. He has a strong product  development background, he loves design, innovation, new technologies, and all things  digital.

In his professional journey, Boris was responsible for content, editorial, both print and  online products, digital operations, technology, sales and marketing. He executed an  all-around digital transformation of his former company, while his products, campaigns,  innovation initiatives and communication solutions have won more than 100  international awards. His full focus on digital transformation included extensive  educational programs, employee training and the founding of internal technology  solutions teams, including Data Science & Machine Learning team.

Turnarounds and change management have been a part of all of his jobs. Beginning  2021, Trupcevic took over the leadership of Swedish beauty-tech brand FOREO as the  company’s CEO and found himself at the forefront of yet another transformation,  elevating the beauty-tech brand beyond the beauty category and into well-being. In  2021 alone, under his leadership, FOREO expanded its portfolio with 8 new innovative  products, with even more planned for 2022. Trupcevic took a major step towards  sustainability and continues to drive innovation as well as strong focus on customer  satisfaction.

JJ has substantial expertise in leading digital transformations in consumer branded and retail companies. He is currently the Chief Digital and Technology Officer at Kingfisher where he leads ecommerce, digital platforms, marketplaces, data and technology.  He joined Kingfisher from Danish toy company, The LEGO Group, where as Chief Digital Officer, he led the company’s digital ambition to make e-commerce the largest part of the business. Prior to this he was a member of the Board of REWE Group and CEO of REWE Digital, where he oversaw all aspects of the digital agenda, including e-commerce operations, technology infrastructure and digital marketing. With his team, he designed and built a digital ecosystem which linked physical and digital channels via mobile and AI technology and launched continental Europe’s first automated food fulfilment centre. REWE is now the largest grocery e-commerce player with its home delivery and click and collect fulfilled from either stores or automated fulfilment centres. He also led the investment in Commercetools which is now the world’s leading e-commerce platform. JJ has also held leadership roles at companies including Tesco and Travis Perkins.

200+ mic drop speakers from every corner of the retail and grocery ecosystem rocked the stages at Shoptalk Europe 2022. The search is now on for which industry pioneers, rising superstars and legends will join our 2023 speaker line-up. 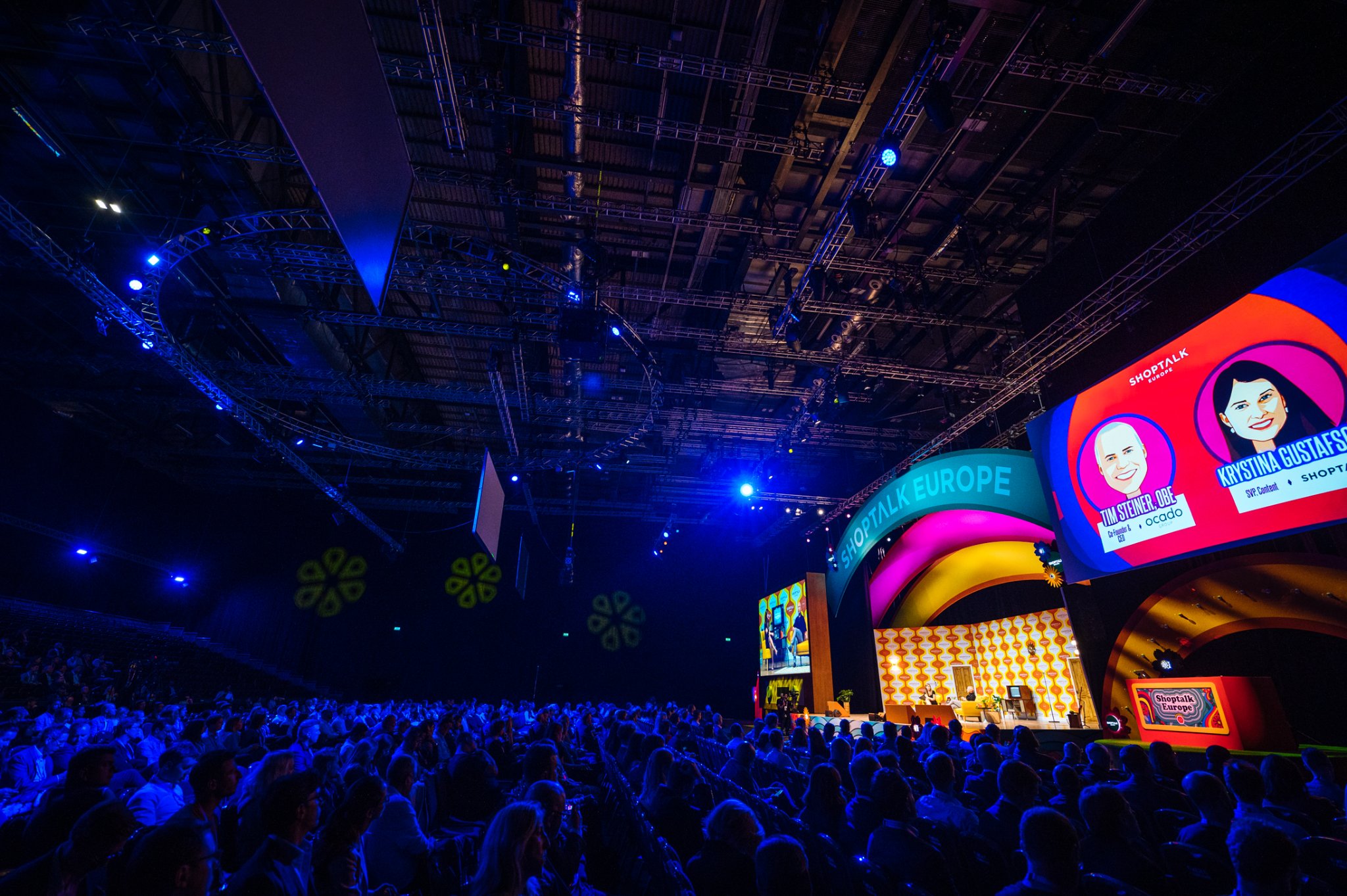